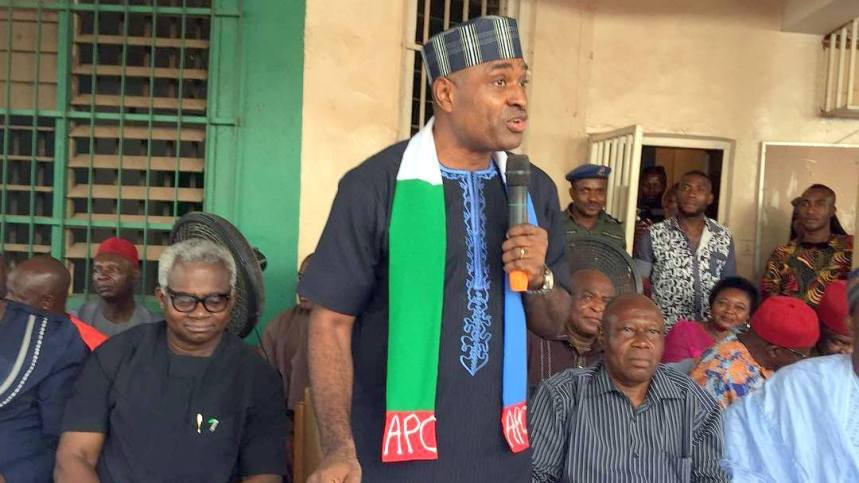 By Iyabo Aina
…Says, “A Remake of ‘Living in Bondage’ is almost done”
The genesis of Nollywood has variously been said to begin with the film ‘Living in Bondage’ which featured superstar actor, Kenneth Okonkwo as the principal actor. Though made 26 years ago, the film has rung through the years as unforgettable.
In this interview, the man who made it happen, in conjunction with others, are bringing it back to life! Here, Okonkwo talks about the ‘new’ Living in Bondage and his political ambitions.
What projects are you working on now?
I am trying to be the governor of Enugu State, that is the project I am working on now. I am trying to contest for the governorship of Enugu State under the platform of APC. Then of course, I am a movie guy, so there must always be a movie on ground and we are also trying to remake ‘Living In Bondage’.
What inspired your political ambition?
That is because we are in democracy and democracy should be for everybody. Everybody might not be in power at the same time but everybody should be in politics because you should decide what should influence your life. The leadership of any nation influences the life of everybody and so everybody should be in politics. However, I have been politically active throughout my life from my university days. I was the secretary general for the society for the advancement of business management when I was in UNILAG doing my Masters. I was also the president of the Society of International Law and Diplomacy. So, I have always been in politics and like I said earlier, I do the things that I am passionate about and that s why I come out with determination.
What came to your mind when you were contacted for the remake of ‘Living in Bondage’?
What came to my mind was that they want to repackage what started Nollywood and fit it in to the modern environment of movie world and I thought it was fantastic because a lot of people were not born 26 years ago when the film was first made.
Do you think movie lovers will get what they got from this movie 26 years ago?
Well, if you get what you got 26 years ago then we have done nothing. What we are looking at now is doing better with the story. No doubts, you are going to get a better story. A lot of things we did then were in the shadows but now a lot of them are going to be in substance. You will get something fantastic, something explosive, something beautiful, something that is going to be the 21st century Nollywood because we did the first one in the 20th century.
What are the things you consider before accepting a movie role?
I consider first and foremost the story, there has to be a strong message. I rate my story into three; one, it is beyond redemption if the plot is bad and the dialogue is bad. I won’t even look at it. Two, if the plot is fantastic, the dialogue is not good, I can look at it provided I’m given freedom to remold it, it is redeemable. When we started ‘Living in Bondage’ it’s always in a plot form and we became used to being able to remold it. A good plot is good enough for me even if the dialogue is very poor. The third one is, the plot is good and the dialogue is fantastic. I will accept it. Once the plot is good and the dialogue is excellent, I can even cut down my fee to be part of it because I will not be doing much work but only enjoying myself. So, I consider the story, the cast and crew, the costume, the makeup, I don’t mind working with new artistes but they have to be good. Just because we started Nollywood doesn’t mean the new artistes are not good, I cannot discriminate against new artistes. I don’t have the mentality that it has to be old artistes, that is why most of my movies bring out new artistes but the person has to be good. I never knew the person that brought me out through ‘Living in Bondage’. I also consider the role; the role has to be good. People want to feel my impact, if I come into a movie and I’m done in two scenes they will think they have been duped. I remember one movie I made that I died in the first scene, the artiste that acted with me said she had problems convincing her brothers to sit down and watch the remaining scenes because they felt once Kenneth Okonkwo is dead there’s nothing more to watch.Click to continue reading.