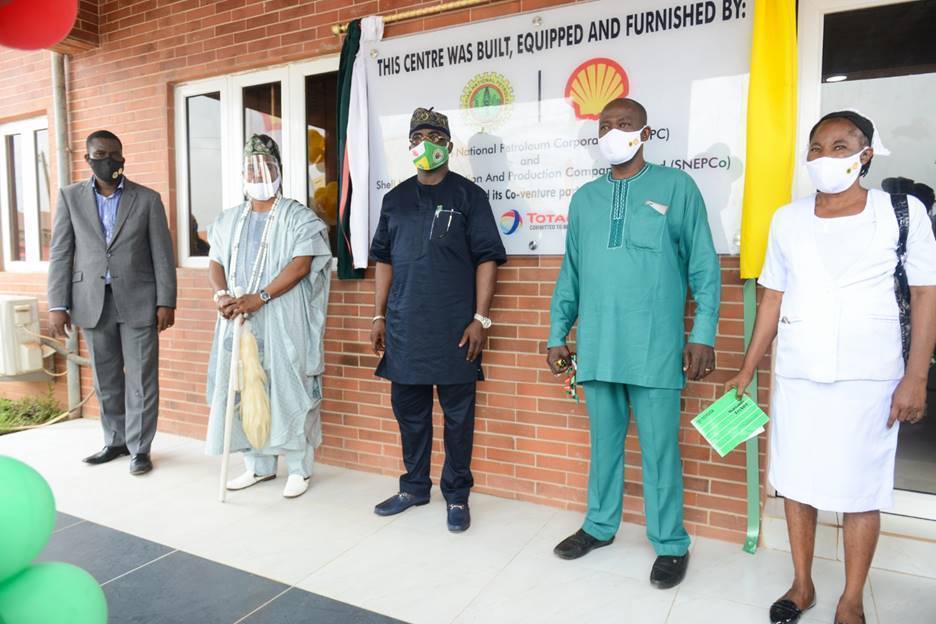 Shell Nigeria Exploration and Production Company Limited (SNEPCo)  has donated a 20 bed ultra modern medical center to the Ogun State government as part of its ongoing response initiative aimed at supporting state governments  in the fight against the dreaded Covid-19 global health pandemic.

The government of Ogun State and leaders of Ogijo community in Sagamu Local Government area of the state have described the 20-bed ultramodern medical centre donated to the community as a model of primary health care facility worthy of replication across the state.

Taking delivery of the facility during a virtual ceremony held recently, the Ogun State Commissioner for Health, Dr. Tomi Coker commended the com any management on the initiative adding that the donation was timely, coming at a time that the state was struggling with the dearth of facilities to manage the increasing cases of infection of the novel Coronavirus in the state as the state government alone could not bear the burden of public healthcare delivery.

“We’re very appreciative to NNPC and SNEPCo. This medical centre could not have come at a better time as it will go a long way in strengthening the state’s primary healthcare delivery system,” she said.According to Commissioner, NNPC and SNEPCo had supported Ogun State for more than eight years during which the companies had trained over 200 state health workers. “With this state-of-the-art medical centre, I am sure that the people of Ogijo would have the qualitative, affordable and accessible healthcare that the governor promised all the citizens of Ogun State.

”The traditional head of Ogijo, Oba Kazeem Gbadamosi, noted that the facility was not just a pride for Ogijo but for Ogun State. “This is the best of its kind in Ogun State and we’re so excited to have this delivered to our community by NNPC and SNEPCo.”

Managing Director of SNEPCo, Bayo Ojulari, who handed over the facility to the state government noted that the focus of the social investment policy of the company was on health and education, and that SNEPCo would continue to strengthen its relationship with governments across Nigeria for better healthcare and education systems.

He said: “Our health intervention programmes have been delivered in many states and our secondary school and university scholarships are continuing to grow. With the support of NNPC and our co-venture partners, we will not relent.”General Manager of the National Petroleum Investment Management Services, an NNPC subsidiary, Bala Wunti, who was represented by NNPC’s General Manager, Services, Yahaya Yunusa, charged the state and Ogijo community to provide effective management of the facility in a manner that will provide the required healthcare services to the people.

Ojulari added:  “Sustainability should be paramount in the management system to ensure that the facility serves the purpose for which it is meant.”The facility was the second of its type donated by SNEPCo in recent times. The company had recently rehabilitated and equipped the Casualty and Trauma sections of the General Hospital Odan, Marina in Lagos State with state-of-the-art medical emergency equipment, and also donated fully equipped custom-made ambulances for easy access different parts of the state.

As one of the world’s leading energy companies Shell plays a key role in helping to meet the world’s growing energy demand in economically, environmentally and socially responsible ways. Shell has a history of over 50 years in Nigeria and the largest footprint of all the international oil and gas companies operating in the country.